About Claire Roche – by John of Nature Folklore

Not only is Claire’s music unique, but it is emotionally moving especially when we are present in her live performance.

Claire has a passion for words and the spirit and expression or words. Rather than just play tunes, Claire has chosen the harp to be her accompaniment, and her choir. Claire's words, music and passion gently warms the hearts of those present and fires their spirits into passion, courage, tears, love and laughter.

Dancing In The Wind.

With permission from the family of W.B. Yeats, Claire combined her wonder of literature and harmony of harp to create an outstanding work of Yeats poems set to music. This is now recorded as a collection aptly titled “Dancing In The Wind”.

From Then To The Here And Now.

Greatly inspired by her childhood home in Dublin, once a miniature farm, Claire has recorded some wonderful original songs accompanied by harps and piano that have been released as a passionate collection through her Double CD, 'From Then To The Here And Now'.

Introducing The Harp to Weddings

1988 Claire turned professional due to her idea of offering harp music and songs for wedding ceremonies, a service that did not appear to be offered at the time. Claire has now performed at 398 weddings all around Ireland, and has released a compilation album called 'An Irish Wedding Ceremony.

Claire is often asked to perform songs and tunes from the Irish tradition and has released two albums with selections on them. 'Lilt Of The Banshee' and 'Songs From The Harp Room' that is also a collection of songs she learned at school and is dedicated to her harp teacher then, Mairin Ferritear, who also taught Mary O'Hara.

Performances And Tours
Nine concert tours in Australia and some extensive tours in the USA including 27 concerts in 22 states during 5 weeks in March and April 2009. Also 20 concerts in 5 NW USA states during Spring 2012. Plus some radio and TV performances too and has opened for The Chieftains and The Furey Brothers in Florida.

Within Ireland, Claire has performed on various radio stations around the country and at various venues. This include 10 performances at the National Concert Hall, Dublin, some being lunchtime concerts and others being during the evening. One of those concerts being shared with singer harpists Madeleine Doherty and Fionnuala Monks.

Two fairly recent reviews of. One is from Irish Music Magazine, that I have posted as a photo below, so please zoom to read.

A second from The Irish Times, December 2018 by Siobhan Long, not a fan but worth posting ...

'To say that Claire Roche's music is otherworldly is to state the blatantly obvious ... for sure, lurking deep beneath her grandiose musical gestures are echoes of Kate Bush, circa Wuthering Heights, Joanna Newson and, regrettably, Enya' 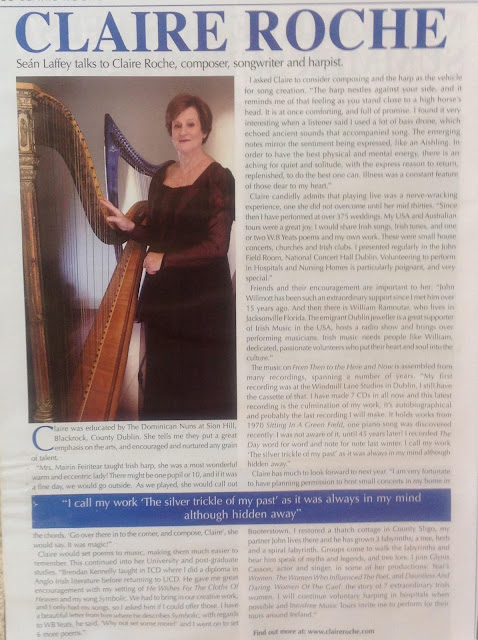 To Invite Claire To Perform For You

You may book Claire and John together for a show of songs, stories, and harp music

Click here to inquire and invite Claire to you place, space or event .